Do We Really Need ANOTHER Set of Lights on Chemong?

Traffic across the line of the Parkway is the problem, not traffic along it

One of our biggest criticisms of the Parkway Corridor proposals is that they appear to go against common sense in addressing our traffic needs, particularly in the Northend. Based on our experience (those of us on the team who live in the Northend) and looking at the maps of projected growth, it is clear that traffic UP-AND-DOWN our traffic grid is the main issue, not across it. As we indicated before, and shown in the map below, the Parkway does not connect most of the places we intend to grow and the places we want to go. 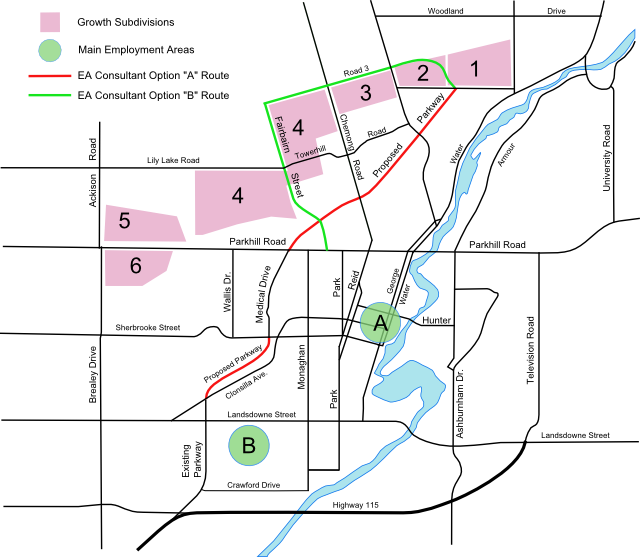 The big traffic pressure in the Northend appears to run up and down the north-south streets: Chemong, Fairbairn and Hilliard. As just one out of many examples, the preferred route for someone leaving the downtown (one of the two main employment areas identified in the City study) to the new growth subdivisions (the pink blobs) would be up Water, and up Hilliard. If Chemong were a better road or better connected to the downtown, they would use it. Most of those moving from the growth areas to the main employment areas would NOT use the proposed Parkway.

Connecting the new growth areas to the City’s west end employment areas is less clear. The west end growth area is very dispersed. The entire Eastern end of the Landsdowne strip is not served by the Parkway. When would folks in the new subdivisions use the Parkway? Traveling to Home Depot? Nope-Park Street. Traveling to Landsdowne Place (the largest Southend destination)? Nope-Monaghan. Future Shop? Yes (but they would take a jog through Webber Street and avoid the South Parkway). Again, the Parkway only connects a small portion of the destination zone.

In the Northend, Chemong is the main transportation link up and down the City. While it has long had Canadian Tire, with the growth of Walmart and the addition of new stores like Shoppers Drug Mart, Chemong is rapidly becoming what Landsdowne is for the Southend. Or it would be if it wasn’t for the chain of traffic lights that make it a frustrating experience for most drivers. No less than eight sets of lights now greet the driver wishing to travel Chemong northbound from Parkhill. Do we really believe the situation will be better with the addition of another set of lights at the new Parkway?

The pattern of development along Chemong also illustrates another apparent error in the thinking around the Parkway. The two main grocery stores in the Chemong Corridor are at Towerhill, three sets of lights North of the proposed Parkway. Do the engineers really believe a driver in the Northend above Hilliard and the Parkway is going to drive down the Parkway and up Chemong? NO, they will avoid the lights and go along Towerhill like they do now. People in the northern neighbourhoods are still going to look to McLennan and Bellevue to get to the Brookdale area of Chemong.

Plans are in place for improvements to Chemong. These plans are on hold pending the outcomes of the Parkway EA. If the Parkway proposals are approved Parkway improvements will be in direct competition with Chemong improvements. And given the action of City Hall in the past, we know which choice is going to win. We KNOW we have a problem with Chemong. We KNOW how to fix them. Everyone across the political spectrum, even the more ardent “NO Parkway!” supporter is in favour of improving Chemong and its connection into the heart of the City. Let’s get moving on fixing a clear and present problem rather than chasing a solution many do not believe is the answer. An answer that is only going to make moving up and down roads like Chemong, Hilliard and Fairbairn harder than it is now.

We simply do not traverse the City as much as we used to.

A fact that seems to be lost on the City proponents of the Parkway is that Northender travel habits have changed. Due to the establishment of stores like Home Hardware, Millwork Home Centre, Metro, Sobey’s, Canadian Tire, Rexall, and Shoppers Drug Mart, they no longer need to go to the Southend for their larger shopping needs. Unless they need a Starbucks low-fat soy latte (Starbucks) or a fancy big screen TV (Future Shop), Northenders don’t need to traverse the City anywhere near what they used to. The upgrading of Walmart to a Supercentre appears to have been the final nail in the coffin. The main thing they don’t have (Costco) is, due to the shopping volume, something they only go to on occasion. We are hearing it time and time again as we talk to people and distribute signs: “We simply do not go to the Southend so much these days”. So why would we destroy the best of being here (our parks and greenspaces) to improve our ability to go somewhere we don’t need to go so often.

The Parkway is simply a traffic route that time(and the pattern of development of our City) has passed by. Yes, it serves those in Lakefield who want to get to Walmart or the Hospital (a near daily occurrence, we are sure), but beyond that its value as a transport connector is not very clear. Why should people who actually live in the Northend give up one of the best things about our neighbourhood (and something that brought us here after the 2003 referendum) for the sake of three minutes off the rides of those who live elsewhere? In addition, the Parkway will be a barrier across the routes we DO want to go: up and down roads like Chemong and Fairbairn or even Hilliard.

This entry was posted in Why No?. Bookmark the permalink.