If They Build the Road, They WILL Build the Bridge

We are concerned that the media and the City are increasingly treating the Parkway extension and the bridge over Jackson Park as separate issues. While we have not seen any definitive report on councillors’ positions on the Parkway Greenway proposals, there have been some definite positions on the bridge through Jackson Park. In an April 2nd article in the Peterborough Examiner, six out of the ten City councillors indicated they were opposed to a bridge through Jackson Park. Councillor Juby was undecided and councillors Vass, Beamer and Hall have suggested they are waiting for the completion of the EA study. 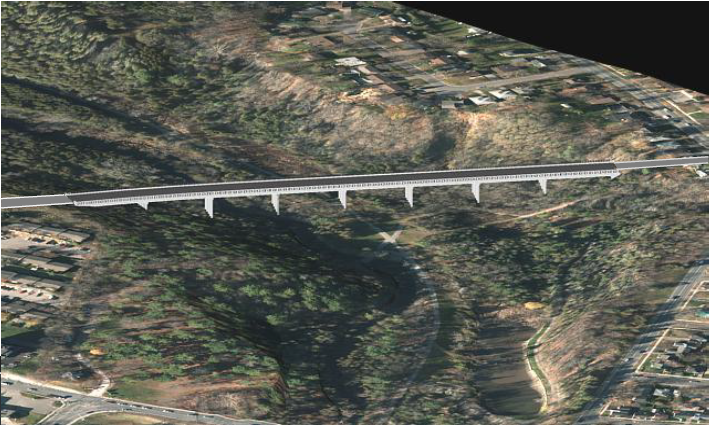 AECOM’s visualization of the Jackson Park Bridge: Aerial view from the South

We understand that the two topics can be seen as separate issues. Our coalition is made up of several groups, one of which is focused on Jackson Park. Another group focuses on city trails which, while including Jackson Park, go well beyond it. The many individuals supporting our coalition may support one or another or even all of our constituent groups. But we all realize that the Parkway Corridor proposals are a threat to all of our concerns.

If we can assume the “nay” councillors stick with their position, six votes against suggests there won’t be a decision to build a bridge through Jackson Park. Councillors will be able to vote yes for converting the Parkway greenspace to a road and show they care for the parks of Peterborough by voting against Jackson Park bridge proposals. Given that the most passionate opponents of AECOM’s current Parkway Corridor EA recommendations come from those concerned about Jackson Park, this seems like a good political strategy. Jackson Park will not get a bridge. Or will it?

The Parkway by Stealth

To us, what has been one of the most upsetting aspects to the City’s approach to developing the Parkway as a roadway has been what we call the “Parkway by Stealth”. By breaking up the Parkway program into incremental elements and moving them ahead under a range of excuses, they have been able to move the Parkway forward without appearing to actually have a formal Parkway agenda.

If we ignore the southern section of the old Parkway, the first phase of the Parkway by Stealth was, of course, Medical Drive, or as we prefer to call it Parkway 1.1 (the middle Parkway). Despite fierce opposition, the City was able to move Medical Drive forward with the excuse of it being needed to support the Hospital. This, despite the Hospital having been on record as not wanting its construction. Once in place, Medical Drive became the springboard for further arguments for Parkway expansion: “How can we leave a gap between Medical Drive and the lower portion of the Parkway; it does not make sense?”. “Medical Drive just ends at a blank, we have to connect it”, and so on…

We cannot let Jackson Park become a bargaining chip in the Parkway proposals.

We worry that voting down the bridge proposals will let the current council off the hook with many opponents of AECOM’s plans. Let’s project that decision forward several years to when the Parkway is completed from the Zoo to Fairbairn. Are we to believe the powers that be will allow the gap at Jackson Park to remain? The council then will be able to duck full responsibility by pointing back to the decision made by council now. “Well, that was a bad decision back then, we are just cornered into making this decision. We have to build the bridge”. While we are not suggesting that this is anyone’s plan now, we have seen such a scenario played out elsewhere time and time again. No one is the total bad guy (or gal) and everyone took a valiant stand on something. But in the end, the public lost.

We are not opposed to development. Indeed, we would like to see proposed developments on Chemong move forward since this will move traffic in and out of the City and not across the top of it, like the Parkway/Jackson Park route. We want improvements that make sense (see our article, ‘The Parkway doesn’t get us from where we are to where we want to go‘).

If ever there was a scenario that fell into the “united we stand, divided we fall” situation, the fate of Jackson Park and the Parkway Corridor Greenway is it.

If the City takes away one, the City will certainly take away the other. Sooner or later.

This entry was posted in Red Herrings, The Parkway By Stealth and tagged is_this_right?. Bookmark the permalink.