It IS an All-Consuming Monster

Parkway costs just go up and up and up

When we ran our hallowe’en advertisement on the Parkway, that used a bad horror movie theme to critique the Parkway proposals, we got some negative comments that suggested we were taking the issue too flippantly. In our defense, we just wanted to inject a lighter tone into the discussion—a different tack than the usual logic arguments. It turns out, however, the idea of the Parkway being an all-consuming monster, hungry for more and more resources, wasn’t far off the mark. Look at the numbers: 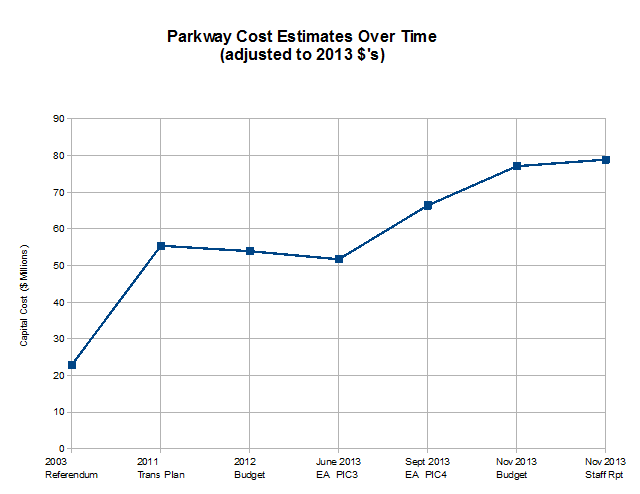 These costs are staggering. Do we want to put the financial health of the City in jeopardy to finance this? Do our children want to take this debt on?

In this light, two things are very worrying about the Parkway proposals put forward by the consultants and City engineers. One, the overall costs of the Parkway and two, the projects that are not going to get completed because of the massive costs of building the Parkway.

The cost has grown and grown. Like an out of control science experiment, the costs have doubled or even tripled. If we use past capital projects the City has undertaken (Medical Drive, the Hunter Street Bridge, the CPR bridge), current estimates for the Parkway are hopelessly low. If we project cost over-runs on past City projects to the Parkway, we are likely looking at a 100 million dollar price tag.

The new threat on the horizon can be found in the final report of the EA process. On page 8 you will find a list of road improvement projects that, should City Council approve this report, will NOT be going ahead in the near future. The consultants suggest that, because we build the Parkway, these improvements will not be necessary. Realistically, it is more a case of because we have to pay for the Parkway, we won’t be able to afford them. 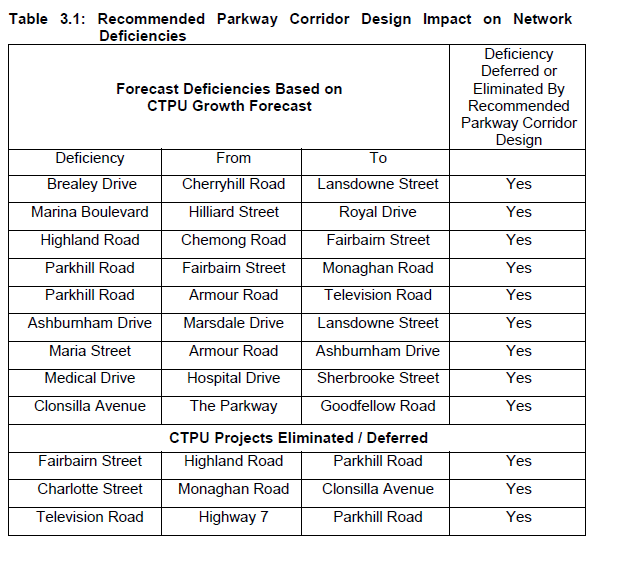 It doesn’t matter that several of these projects included plans for a “complete streets” rebuild. They won’t be happening if the City gets its way and gets to build the Parkway starting next spring. So, for example, if you are a pedestrian who wants to safely walk from the Marsdale area to downtown via Ashburnham and Beavermead Park, well, sorry, we don’t have good news for you. But, as you try to cling to the edge of an aging road with no sidewalk, you’ll feel better knowing that someone, somewhere, has arrived at Walmart two minutes earlier than before.

And some of it pushes the limits of credibility. Are we to believe that building the Parkway will reduce traffic on Maria Street in East City. Maybe this is one of those “When a butterfly flaps its wings it causes a hurricane” effects?

Actually, when we think of it, it might. There will be more people wanting to move to East City out of the Northend because East City will still have a greenway multi-use trail.

We may have, indeed, created a monster.

This entry was posted in The Class EA, Why No? and tagged is_this_right?. Bookmark the permalink.