It’s a Glorified Sidewalk, Not a Trail

Parkway Proponents Clearly Do Not Understand What Trails Mean

One of the main points AECOM is putting forward in their efforts to reduce opposition to their proposals to pave the Parkway is that a trail can still be accommodated beside the Parkway road. For trail users, it is possibly the one part of the proposals that makes the least sense. A trail beside a road does not equal a trail through greenspace.

If one was only looking at a trail as a mechanism to get from A to B, then yes, the two serve the same function (which is why an engineer might equate the two). But, for trail users, the greenway is not about getting somewhere, it is about being somewhere. Being outside, away from the noise and clutter of suburban living and trying in some way to connect to nature and things that are not concrete, wood and plastic.

One look at the following pictures shows the difference. How can anyone make a comparison between these scenes?

The Parkway Trail near Hilliard 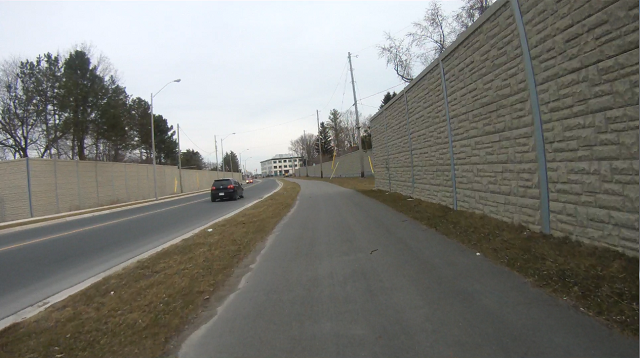 Families out enjoying the Parkway Trail near Hilliard

No one out enjoying former City trail on Medical Drive

The value of our trails when converted to sidewalks-on-steroids falls to near zero.

Nearly all of the reasons we want to use greenway trails are tied to the separation we get from roads, traffic and other annoyances and the closer we get to the natural environment and the creatures in it. We are there for the sights, the sounds, the exercise, the peace, the quality of life. 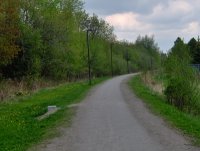 What we used to have before Medical Drive

Focusing on the North Parkway corridor, it would be interesting to see how many people live in the north end due to the Parkway Trail (or would be less likely to want to live in the Northend if there was no trail). Studies have repeatedly shown that people are drawn to trails and greenways when selecting where to live. Many people have come forward to say they only decided to move to the Northend after the referendum of 2003 and they thought there was no longer a risk of the Parkway being built. We have also heard from people who have said they chose not to move to the Northend because of the new study into the Parkway Corridor.

While engineers seem to have a difficult time quantifying the value of trails or simply don’t get paid to do so (although there are methods used for this in other disciplines), for many citizens it is THE defining issue in this debate.

Is the loss of our trails worth three to four minutes off a trip across town?

For many, and we strongly suspect the majority, the answer is a resounding “No!”. Planners, engineers and councillors, please stop insulting our intelligence and misleading the people by asserting that the trail can be replaced when you put in a road. Go stand on the fat sidewalk at the side of Medical Drive and state with a straight face that this is a trail that provides you some measure of peace and tranquility and is something you would actually want to use. You can’t. So stop it.

And lest anyone think we cherry picked the pictures above, here are two videos shot along the current Parkway and Medical Drive. Take ten minutes to compare them. Both shot in April. Note the number of users. The one difference, the Parkway video is a morning commute, the other an afternoon commute.

One is a greenway, the other is a greyway (or worse).

Now, ask yourself where you would rather walk?

Peterborough, it’s a natural! Let’s keep it that way – green, natural, and beautiful.

Note: An original version of this post appeared on the website of Friends of Peterborough Trails, one of the partners in the Peterborough Greenspace Coalition. It has been updated and added to our website so you have one stop for information on why we don’t need the Parkway and a bridge through Jackson Park.

This entry was posted in Red Herrings, The Class EA and tagged is_this_right?, quality_of_life, trails, truth. Bookmark the permalink.