Parks Not Parkways at GreenUP Expo

The Peterborough Greenspace Coalition took its “Parks Not Parkways” (PnP) campaign to the people on Saturday when it ran a booth at the 10th annual GreenUP Expo at the Landsdowne Place Mall. With over 20 exhibitors, the GreenUp Expo is Peterborough’s premier exhibition of sustainable businesses, organizations and ideas on creating a sustainable, richer Peterborough. During the course of the day we talked with many people passing by and many people took the time to step into the booth, look at the displays, ask questions, and collect information. Some wanted lawn signs and others signed the Parks Not Parkways petition. 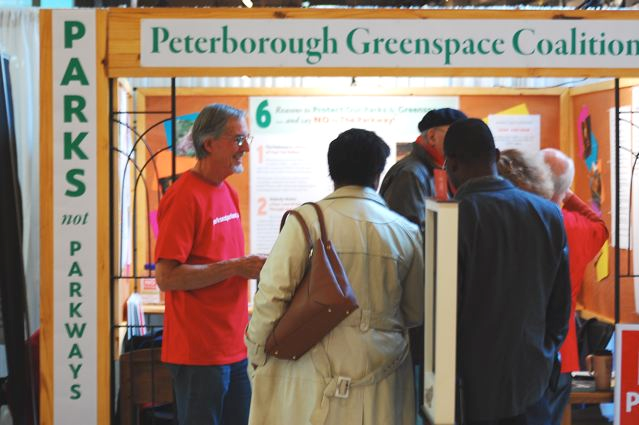 The PnP volunteers were unsure how people would react at the Mall location. So far, we have been out at the Saturday Farmers Market, a venue that would attract those most naturally inclined to support a No Parkway position. The Mall on a busy (and rainy) Saturday would reflect a broader cross section of Peterborough. How would they react? The answer was overwhelmingly positive. 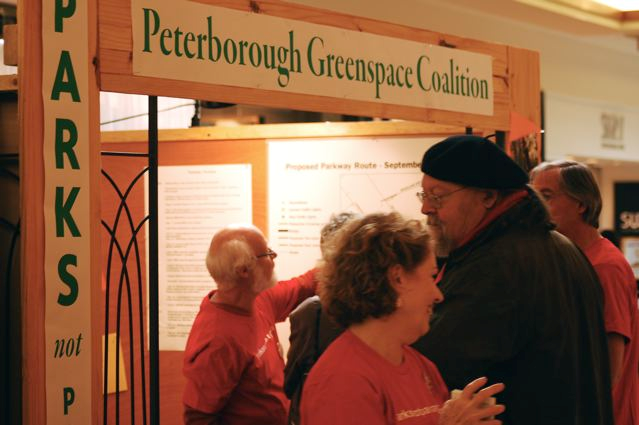 As expected, some people supported the Parkway and our crew respectfully recognized their right to do so. Interchanges were generally good natured and some discussions on the pros and cons ensued. An informal, totally unscientific tally of the positions of those we talked with showed a better than four-to-one ratio of people opposed to the Parkway.

Now, we admit that those in support of the Parkway might avoid interacting with us, but a four-to-one ratio? What was interesting was the range of reasons for opposing the City’s plans. Some wanted to protect our greenspaces. Others thought the Parkway wasn’t the answer. Several people were clearly very upset at the idea of spending more tax dollars and an increase in taxes. Opposition was clearly across the political spectrum.

Newcomers to Peterborough seem particularly upset with the idea of paving over our greenspaces. While we get the evidence is anecdotal, we were surprised by the number of people who approached us indicating they were new to Peterborough and had moved here because they felt Peterborough was a beautiful city, full of natural spaces. When we suggested this was a plan to deal with traffic congestion, the nearly uniform response was an outburst of disbelief or derision followed by words to the effect that the worst of Peterborough traffic is nothing compared to most other Ontario cities. These new citizens were possibly the most interested in finding out how to indicate their opposition to Parkway plans.

As far as we were concerned, the day was a success. We reached out to many people during the day and passed on information about the project. We got a clear indication that (while not a scientific study) a clear majority of people oppose the City’s plans for the Parkway and Jackson Park. Either that or we are a very intimidating group who scare away the pro-Parkway people. Check out the pictures. Do we look intimidating?

We met many people opposed to Parkway plans. Now, will people act on their opinions and let City Council know what they think?

This entry was posted in Events. Bookmark the permalink.