Presentation to City Council on The Parkway by the Peterborough Greenspace Coalition, October 2, 2017

My name is Cam Douglas, and I am speaking to the staff recommendation regarding the Parkway.  I am a spokesperson for Peterborough Greenspace Coalition. Our organization submitted one of the 88 appeals for a Minister’s Part II Order and we have been a conscientious intervenor in the process from the start, including submitting three detailed and substantial reports to the Ministry of the Environment critiquing the Class EA during the past three years.

You might recall that I stood in this very spot one year ago when council was looking to ask a consultant for advice on next steps for the Parkway Individual Environmental Assessment. At the close of my remarks, I indicated that I, and so many others who share my concerns, would much prefer to sit at the table, to have real conversations about how to move our transportation issues forward, rather than run around hammering in lawn signs and writing large critiques to the Ministry of the Environment. The Minister’s Order gave our City an opportunity to press the pause button, to catch our breaths, and to find a path forward together that reflects broadly our values and future. So many citizens in the community saw an Individual EA as an opportunity for collaborative problem solving, insofar as the Province would help set the terms of reference for the conversation, and would adjudicate the process – “3rd party” mediation, if you will. This could have been a process that would set out to regain public trust while healing the wounds inflicted by the flawed consultation process of the Class EA.

So it is with real sadness that I find myself here again, feeling like we are no further ahead.  Indeed, we seem to be doubling down on an approach that has divided us and still found no solution. I encourage you to consider for a moment… that the Citizens of Peterborough are not your competition.  We are your constituents and we live with our families and communities here in Peterborough. 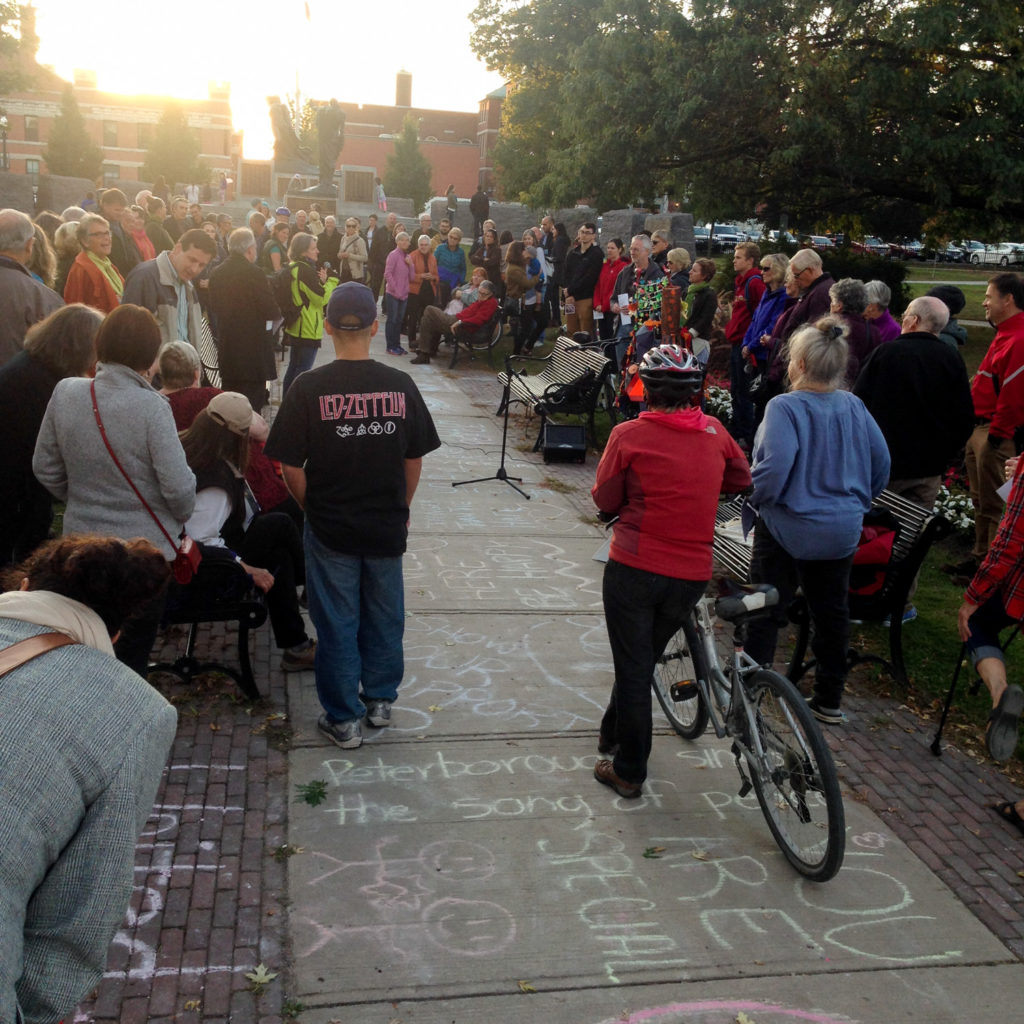 About 150 people gathered outside Peterborough City Hall during the meeting, to celebrate and support Peterborough parks, greenspace and trails and oppose the latest attempt to route around public process and impose The Parkway. The participatory gathering was hosted by Ben Wolfe, and featured community dialogue, music and poetry. (Photo: Michelle Collins)

Many people gathered across the street in Confederation Park this evening, who would normally choose to address this issue, chose not to speak to you tonight. They are now celebrating our greenway trails and Jackson Park, and are also celebrating the exciting array of transportation options that are being taken up by progressive cities the world over.  Many have spoken before with sincerity, respect, evidence and data, and with significant and multiple concerns. But, like me, they likely see clearly from the timing and nature of City’s current recommendation that traditional, top-down decision-making processes prevail, and input is futile. One week notice for this jarring proposal is — it seems — purposefully and cynically short: it minimizes the level of public awareness, interest, and ability for volunteer citizen groups like ours and the media to be able to meaningfully respond. It also minimizes the chances the public will be able to reach out in an informed way to their councillors, and as a result potentially influence their vote. I, too, am under no illusions as to the impact of my remarks to you tonight.

The need for more and better public consultation was one of the principal reasons for the Minister’s Order for an Individual Environmental Assessment of the Parkway. Citizens keep asking your Council table for better and transparent public consultation. We continue to ask to be included at the table, we propose reasonable processes for resolving this and other issues, and we present substantiated and evidence-based arguments about why there are better transportation choices for Peterborough.

This proposal not only ignores the citizens of your community, it totally and intentionally cuts us out.

The Parkway will be very expensive — now minimum $143 million — and will divert taxpayers’ money to a single road project that will prevent and delay other important city projects from being funded, like fixing existing roads, a much-needed new arena, park spaces, and more.

The Minister’s Order was issued after 2.5 years of detailed consideration and additional study by the Ministry of the Environment. The Greenspace Coalition and others presented effective critiques of the Class EA. The 2013 No Parkway petition with more than 6,000 signatures was acknowledged by City staff at the time as the largest expression of public opinion against a City project in memory, and the 88 unique letters of appeal to the Minister of Environment were the largest and most impressive the Ministry of the Environment had ever seen.

Notwithstanding the current makeup of council, when the positions of the candidates in the last election are correlated with the official election results, in all cases the Parkway as proposed appears to have been rejected by voters: for the mayor candidates, all successful councillors, all councillor candidates, and all candidates. The last time citizens were asked directly about building the North and South sections without a bridge, they said NO — in the 2003 referendum.

The City is well aware of this history and yet has the audacity to attack the integrity of the Minister’s Order. 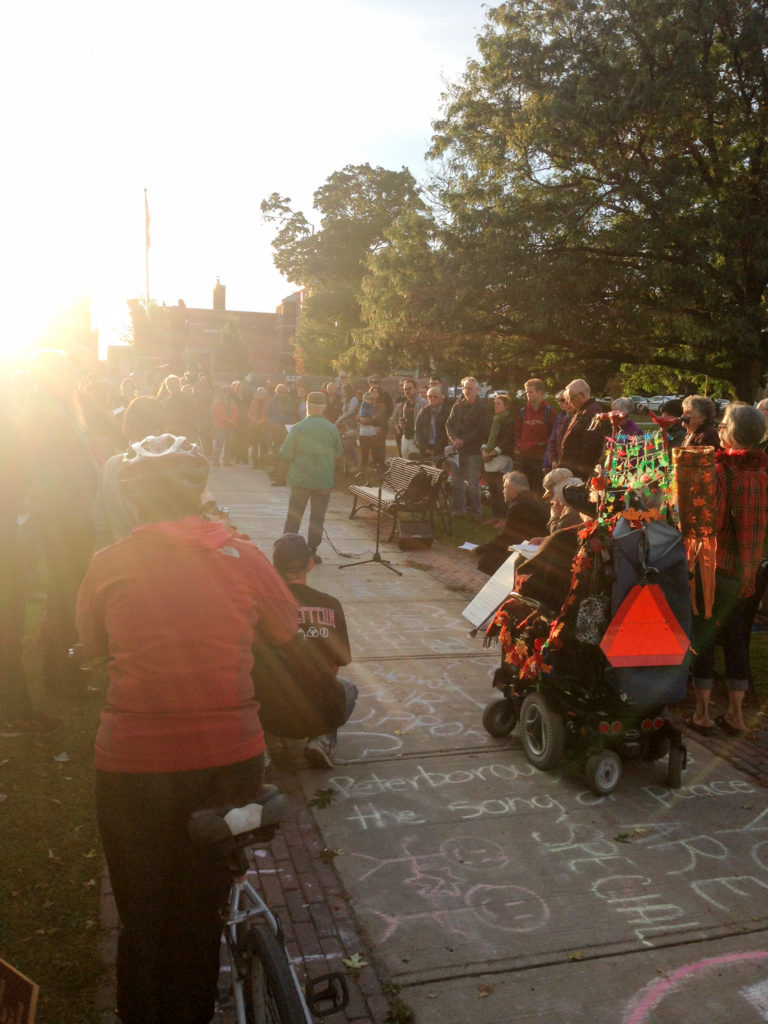 The presumption that the City can simply ask the Premier and Minister to change the Order is improper, and appears to validate the concern that Greenspace Coalition and so many citizens have: the City is determined to build the Parkway no matter the facts or irreversible harm this will cause to our community, to our local democracy, to our most vulnerable citizens, to our local environment and Jackson Park, and to our city’s already-stretched finances and budgets. This proposal defers study and decision-making on the bridge; this is piecemealing, and piecemealing is an offence under Ontario’s Environmental Assessment Act.

This proposal flies in the face of the Minister’s Order and is a blunt-force affront to the state of our local democracy. The Staff Recommendation that Council “allow the Mayor to submit a proposal to the Premier to seek approval to immediately proceed with constructing the north and south sections of the parkway” gives:

It’s so unfortunate for our community that some councillors likely see tonight’s vote on this matter as a victory. In so many ways tonight’s vote is a huge loss for the entire community of Peterborough and our local democracy, regardless of your opinion on the Parkway.

We remain open to constructive dialogue, and to questions this evening.

This entry was posted in The Class EA, The Parkway By Stealth, The Politics, Why No?. Bookmark the permalink.