Stealing Democracy. One (or Ten) Signs at a Time

Last week there was a rash of thefts of No Parkway signs In the Peterborough Northcrest and Town Wards. Previously the thefts have been just a few at a time scattered throughout the city, but at the end of last week several people contacted us to report not only the theft of their own sign but those from their entire neighborhood. It appears that last Thursday night between 20 and 30 signs were stolen. 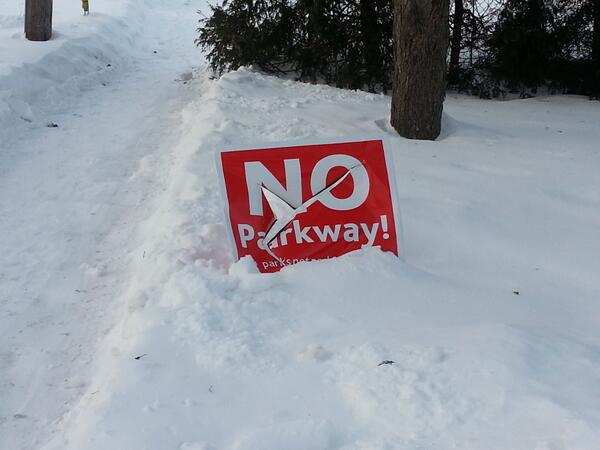 In Canada, we believe in free speech. We respect private property. Clearly the perpetrators of these acts of theft don’t share these values. A democracy such as ours relies on a free airing of all opinions without the fear of being silenced by those who do not agree. It is bad enough when elected and public officials ignore public ballots but this is outright theft of property.

Many residents, and perhaps these thieves, are under the mistaken opinion that the Parkway decision is complete. However, the Ministry of the Environment (MOE) is still considering more than 80 submissions from citizens and groups for a Part II “bump up” request which is asking for a complete Environmental Assessment. One of the criteria for the success of these requests is a show of public support, these signs are a public display of that support. As well the City’s response to these requests was only posted last week and it is not known how long it will take for the MOE to come to a decision on this matter.

This entry was posted in Voices and tagged democracy. Bookmark the permalink.